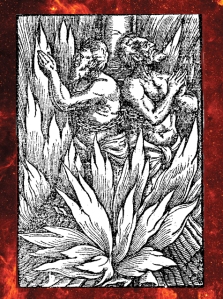 Note: Changes at Slate have removed the memorable discussions of “Classic Poems” that I presented there for several years. The poems themselves and my introductions remain, for those who hunt, but the Fray and Comments texts written by readers are lost.

Rather than simply mourn that loss (and I do mourn it!) I will be presenting the Classic Poems here on my own Forum, hoping to take part in a new, lively conversation, welcoming a range of readers to respond.  —RP

THERE WAS A MAN OF DOUBLE DEED

This anonymous poem exemplifies how poetry can join reason and unreason, method and wildness, so effectively that the opposites become part of a single process. The links and repetitions seem governed partly by rhyme, and partly by some obsessive, hyper-rational formula of causality. As in dreams or some forms of mental illness, the systematic becomes a form of derangement. Here, the erratic movement from thing to thing also feels fateful, and pointed.  Even the sudden introduction of the first person —“When my door began to crack”— feels inevitable and foredoomed, as well as crazy and unanticipated. The doubleness of deed, the doubleness of linked repetitions, the doubleness of couplet rhyme: how can these dual processes resolve themselves? With the disruptive, emphatic, and triple repetition of the final line.

Listen to Robert Pinsky read “The Man of Double Deed.”